Skip to content Skip to navigation
Founders Day
It Takes a Village: From Vision to Reality 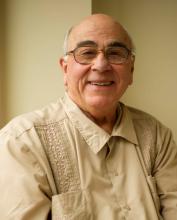 "The End of Time: The Maya Mystery of 2012" by Anthony Aveni

Dec. 21, 2012 -- Is it the end of the world or a myth? Colgate University Professor Anthony Aveni, one of the founders of cultural astronomy, astronomer, historian, anthropologist and expert in the Aztec and Maya Indians of ancient Mexico, will speak in Merced on Oct. 25.

Part of UC Merced’s Vital and Alice Pellissier Distinguished Speaker Series, the free lecture “The End of Time: The Maya Mystery of 2012” begins at 6 p.m. in the Art Kamangar Center at the Merced Theatre, 301 W. Main St., Merced.

Aveni is a distinguished professor at Colgate University and a world-renowned expert in astronomy, anthropology and Native American studies. Rolling Stone magazine named him one of the nation’s top 10 professors, and the Council for the Advancement and Support of Education voted him the National Professor of the Year, the country’s highest award for teaching.

Aveni is considered one of the founders of cultural astronomy, in particular for his research into the astronomical history of the Aztec and Maya Indians of ancient Mexico. He has conducted similar research in North America, Peru, Israel, Italy and Greece, studying history, hieroglyphic writing, calendars and architecture.

He has written 16 books, including “Conversing With the Planets,” an examination of how ancient cultures discovered harmony between their beliefs and their studies of the sky; “Skywatching in Three Great Ancient Cultures;” and “The End of Time: The Maya Mystery of 2012.”

Aveni has spoken or written on astronomy-related subjects for the Learning Channel, the Discovery Channel, PBS-Nova, “The Larry King Show,” NBC's “Today” show, the New York Times, Newsweek and USA Today. He has lectured at more than 300 universities around the world, including Tulane University and the University of Padua, Italy.

The doors open at 5:30 p.m., and those who plan to attend are reminded that downtown parking can be difficult, so people are encouraged to arrive early.

People are encouraged to reserve seats by Oct. 19 by calling 209-228-RSVP or emailing specialevents@ucmerced.edu.

The Art Kamangar Center at the Merced Theater